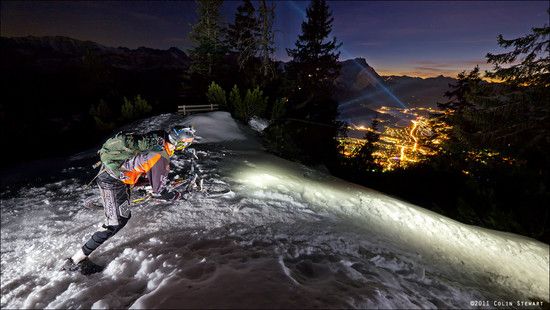 "For the sky then shoot raw, you'd be surprised how much detail is hiding there if you push the exposure in post. Some noise will appear but you can treat that with Dfine. It's a 40 sec long exposure with two flashes on the front curtain. Rear curtain would have ghosted the rider with the trail of light. Normally I don't use front curtain, since the light worm goes the wrong way, but in this case it was okay because you don't see the light source."

I used a Panasonic GH2 and the 7-14mm lens @ 7mm, ISO 160, f/5.6, 40 secs + two Nikon SB24's fired by Skyports. A tripod and cable release are quite useful too. For shots like this you really don't need a particularly expensive cam or a fast lens.

So we've done Chamonix, Salzburg, Garmisch, seen a lot from Innsbruck too ... would be good to see some night shots taken above other cities